In ES5, variables are scoped to the closest outer function where they’re declared:

In the above snippet, the variables car and website are declared inside the if loop, but due to functional scope nature of ES5, the values can be called or modified any way you please due to them being declared within the myFunc() function. This is a bad idea, because it’s very easy to overwrite variables when your codebase gets complicated.

With ES6, you can now enjoy what many other programming languages have been doing for years: block scope level variable declaration.  Let’s take a look at how we can achieve that by using the let and const.

We declared a variable by the keyword let to indicate that this variable should only be available within the block {} it is wrapped in.  In the example above, car and website are only accessible within the if loop and are no longer defined once we attempt to console.log it from the outside!

Does the following look familiar?

when you need to output the value of a variable alongside a string, you would use the + operator to piece them together. That is terrible for readability and prone to bugs/errors in my opinion.

a better/cleaner way to do this would be with template strings:

see the difference? First we replaced single quote (‘) with back tick (`), you can find the button to the left of the 1 button on your keyboard. Then when we need to reference a variable, we simply wrap it in ${variable_name} and that’s it! No more opening/closing single quotes, no more plus signs, and hello readability!

You know what else is cool? You can do line breaks without \n:

simply by putting your content in a new line and it’ll output it exactly the way you formatted it. This is very helpful if you do DOM building and manipulations.

And last but not least, you can also interpolate the value you put in between ${} not just variables!

anything you put in between ${} it will be evaluate it!

Without a doubt, Template String is my favorite feature from ES6, I can’t imagine how much of a pleasure it is to write beautiful to read code using it. 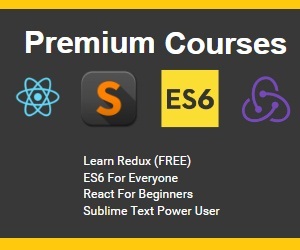